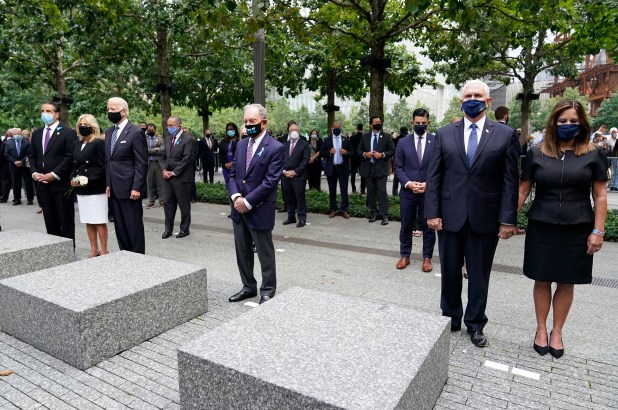 From left, New York Gov. Andrew Cuomo, Jill Biden and Joe Biden, former NYC Mayor Mike Bloomberg, former Vice President Mike Pence and his wife Karen, observe a moment of silence during a ceremony organized by the Tunnel to Towers Foundation on Friday, Sept. 11, 2020, in New York. The names of nearly 3,000 victims of the Sept. 11, 2001 terror attacks will be read by family members.
AP

NEW YORK — A year after a disagreement over coronavirus protocols spawned competing Sept. 11 ceremonies in New York, the 20th anniversary of the 2001 terrorist attacks will be marked with the traditional reading of victims’ names at the World Trade Center’s memorial plaza, officials announced Thursday.

Commemorations will also again include the Tribute in Light, the art installation consisting of two beams of light evoking the twin towers destroyed in the attack.

“In a few months’ time, 20 years will have passed since our nation was attacked on September 11,” Mike Bloomberg, the board chairman of the Sept. 11 Memorial and Museum and former mayor, said in a statement. “We suffered a great tragedy that day and for the weeks and months that followed. We mourned the victims of the attacks and promised to never forget.”

In an effort to comply with coronavirus protocols banning large gatherings, museum officials announced last year that a recording of the nearly 3,000 victims’ names would be played over speakers at the memorial plaza in lower Manhattan instead of family members gathering to read the names.

The Stephen Siller Tunnel to Towers Foundation, a group founded by the family of a firefighter who died at the trade center site, responded by inviting family members to read the names at an alternative ceremony nearby.

“We feel as if that’s something that needs to be done, so we are taking on that responsibility,” said Frank Siller, who created the foundation to honor his brother’s memory.

The announcement that family members will be back reading the names at the official ceremony this year was made six months before the event.

“In the context of the COVID-19 pandemic and the ongoing challenges facing our nation and the global community, the resilience, compassion and hope demonstrated two decades ago in the aftermath of the 9/11 attacks offer invaluable lessons now,” museum CEO Alice M. Greenwald said.

“During this 20th anniversary year, it is our privilege to share these lessons with a new generation, teach them about the ongoing repercussions of the 9/11 attacks and inspire them with the idea that, even in the darkest of times, we can come together, support one another and find the strength to renew and rebuild,” Greenwald said.

Nets to play in front of 300 fans at Barclays Center